+++ Promotion for end customers - Receive an exclusive gift with your order. Click here for more information *** +++
Free delivery for end customers from 59.00 EUR order value, throughout Europe and Switzerland**
Please enable cookies in your browser for best user experience
Sale! 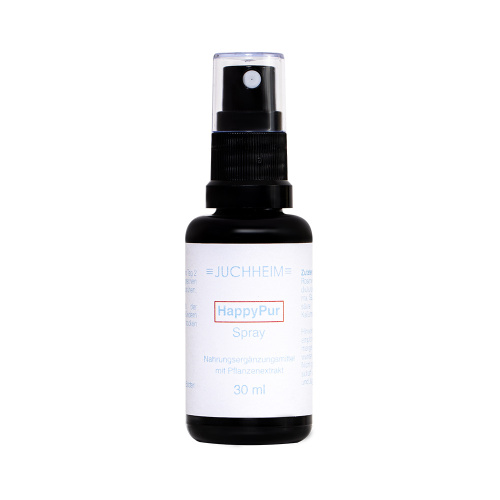 Feel the taste of happiness

Spray the taste of happiness

HappyPur Spray contains micronized roseroot extract with a particle size between 10-40 microns. The extract is standardized and of highest quality.

The Golden Root - an ancient plant

According to legend, even the Vikings chewed the golden root (roseroot). This gave them strength and endurance and helped them to survive the greatest hardships. Roseroot was popularly used as a general tonic and for focus and performance.

Does chocolate make you happy?

Everyone knows the craving for chocolate after stress and strain. Chocolate is rich in the amino acid tryptophan. With the help of the sugar in the chocolate, tryptophane reaches the brain more easily and thus raises the level of the hormone serotonin, also called the happiness hormone. The mood rises. The roseroot extract does it in a similar way as chocolate.

Spray 2 x 8 sprays per day (equivalent to 2 x 1 ml) under your tongue or on the cheek mucosa in your mouth.

We use cookies in order to enhance your online experience. If you proceed browsing, you agree to this. OK More